Where is Bay Laurel Produced? - Native from Minor Asia, mainly produced in the Mediterranean region (particularly Spain, Turkey and Morocco).

What is Bay Laurel Used for? - Both leaf and berry were formerly used for a variety of afflictions including hysteria, colic, indigestion, loss of appetite, to promote menstruation and for fever. It is little used internally these days, due to its narcotic properties. A ‘fixed’ oil of bay, expressed from the berries, is still used for sprains, bruises, earache, etc. 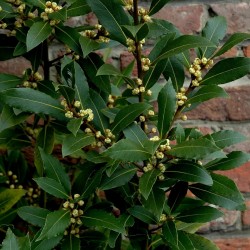 Leaves were used by the ancient Greeks and Romans to crown their victors.

Can cause dermatitis in some individuals. Use in moderation due to possible narcotic properties attributed to methyl eugenol. Should not be used during pregnancy.